The Adjustment Bureau was about a group of God-like beings (or ghosts/angels/aliens/or anything) who arranged the entire destiny of humans, thinking they were doing it for the good for mankind. So, “they” created and destroyed a lot of coincidences and encounters in the world, and “their” jobs were to make the possibilities of events go according to their plans. That Matt Damon, as the object of their current manipulations, naturally represented the free will resistance to this tyranny, and that’s what the film was about, or what the director wanted it to be.

First of all, the logic of the plot was ridiculous “They” have decided that Matt Damon was not a hypocrite and needed to be the President of the United States in order to advance humanity. In order to get him elected, “they” put all their efforts into blocking Matt Damon’s encounter and relationship with the heroine in this film. The reason, surprisingly, was: 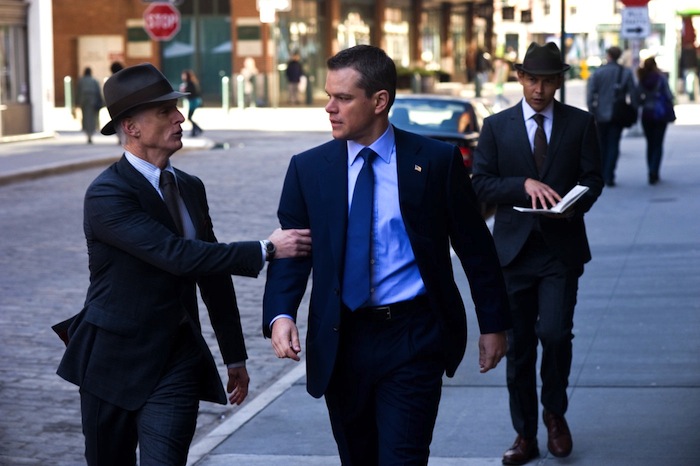 Falling in love can be a bummer! If you fall in love with her, mankind cannot progress and has no future!

In expressing free will, the film essentially replaced free will with free love. Matt Damon’s whole struggle with “them” was whether or not he can fall in love with the heroine. This was not bad, but it made the film a romantic film, whereas I know that the director’s intention was to use love as a representation to promote free will. In the end, free love won, and It would be fair to say that this film was a romance, not a science fiction film.

A few more details. It seemed that the only superpowers of these “people” came from being able to walk through doors and pointed at people with a book which they didn’t understand. This was something we are all familiar with from our childhood with Doraemon and Detective Garrett as kids, not to mention the fact that their powers were in their hats, and Matt Damon would be invincible in a hat like that. The mysterious characters who are so heavily portrayed at the beginning end up being no difference and the methods used were so stupid that they are even more foolish than the aliens in Dark City.

As for the female lead character, I don’t know how many of you have noticed that she is Emily, Anne Hathaway’s rival secretary in The Devil Wears Prada, and although she played an innocent, naive, bitter character in this film, that face from The Devil Wears Prada was still deeply embedded in my heart. I would say that these details added to the comic nature of the film and left me untouched.